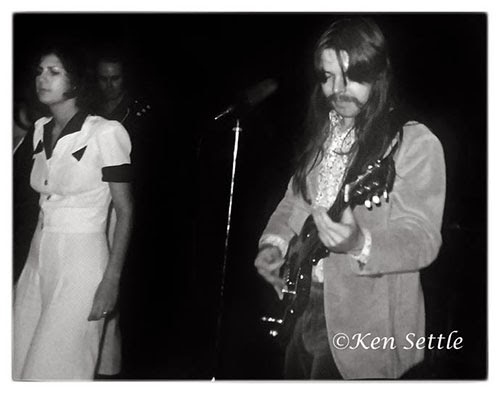 From the film archives: Here's a shot I took from sidestage of Bob Seger onstage with Marcy Levy as he played with The Borneo Band at Lakeview High School in St Clair Shores, Michigan in April, 1973. Seger brought legendary Skip VanWinkle onstage to sit in on the Hammond B-3 for a couple songs. They were having so much fun, Skip stayed onstage and banged a cowbell for the rest of the show when Borneo Band organist Dick Sims came back to the keyboard.

Seger was just brought back out for the third encore. The high school auditorium was getting rowdy and when Bob stepped up to the microphone onstage, a lady, I'm guessing a teacher or principal, came out and touched Bob's arm and said, "I think we better stop now"!!!! lollll Seger said, "We're doing one more," and called a funky guitar version of Jackie Wilson's, "Higher and Higher," with Marcy and Stoney Reese (aka Shaun Murphy) trading lead vocals with Bob!

I just regret not getting Shaun in this shot!! Not too long after this shot, The Borneo Band broke up, and Marcy, Dick Sims on organ, and Jamie Oldaker on drums joined up with Clapton for the next decade or so. Percussionist, Sergio Pastora joined on with Carol King. Of course, Drew, Alto, and Shaun Murphy stayed on for years with Seger. Alto and Shaun, of course are still with him! four or five months after this show, Seger formed the Silver Bullet Band.
at 11:07 PM

Ah, early Seger... There was a time when he wailed like a cat passing a gallstone and his songs would never be mistaken for Chevy commercials.