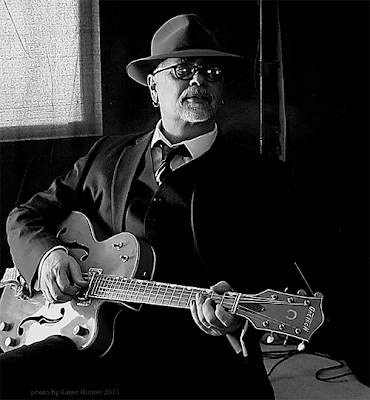 Steve and Karen Hunter have come up with an invaluable gadget for helping change strings on a Bigsby fitted guitar. 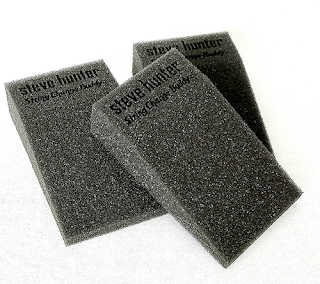 World-renowned guitarist Steve Hunter, known for his work with Lou Reed and Alice Cooper, was trying to change some strings on one of his Gretsch Guitars. As always there was a good deal of frustration as this is difficult for most people, but even more so for someone like Steve who is partially sighted. Only certain guitars have a Bigsby, most of those are Gretsch but there are other makes of guitars such as Gibson and Fender who use the metal string bending arm attachment.

The main problem is how to hold the eyelet at the end of the new string in place, on the pin of the Bigsby, without it springing off when you go to the other end of the neck to wind on the string. Steve said “There must be a way of holding the string in place, maybe something simple that could be taken in and out easily”. Karen thought that a squishy door wedge shape would do the job.

Knowing Steve used foam speaker positioning wedges in his studio she found a spare one. Karen cut out a wedge to the exact requirements and low and behold! The String Change Buddy was born. Steve still uses that very wedge, with less hassle, less time and less swearing! 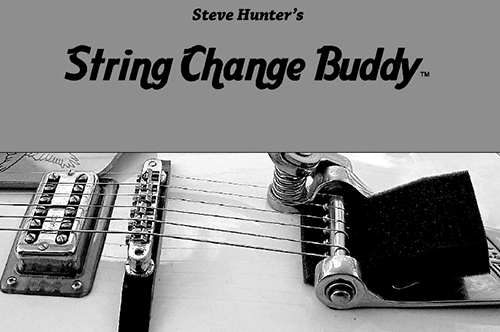 Perfecting the idea for production took nearly two years, mainly due to finding the right foam. It needed to be firm enough to push under the metal bar of the Bigsby but also needed to have the right compression and recovery so it could be used many times. Once they had started the process of protecting the design with a patent, all they had to do was find the right manufacturer whom they are proud to say is right here in the USA. The String Change Buddy will not change the world but it will help anybody with a Bigsby fitted guitar to change strings without losing their cool.