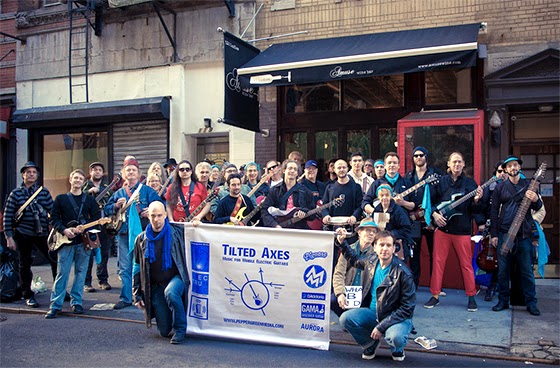 A musical procession through Midtown Detroit, a performance outside & inside of the Detroit Historical Museum, and a Grand Finale at Comerica Park in celebration of The City of Detroit’s 313th Anniversary conceived and produced by composer Patrick Grant and performed by electric guitarists and featured artists from the Detroit Metro Area 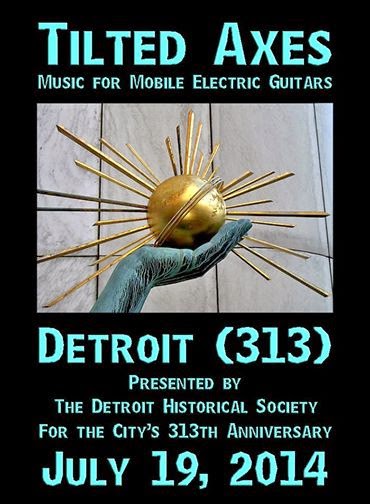 In 2011 Patrick Grant, a New York City-based composer/performer and Detroit native, created Tilted Axes: Music for Mobile Guitars for the Make Music New York celebration of the first day of winter. The title of the project refers to the axial tilt of the Earth that brings about seasonal change as well as playing upon the word “axes” which is slang for one’s guitar or other musical instrument. Since then Tilted Axes has had a number of manifestations in NYC, one in Detroit in 2013 for the first day of spring, and now looks forward to European versions beginning in September.

What is Tilted Axes? It is a body of musical works that are performed as a procession by approximately 30 guitarists with portable mini-amps worn by each performer. They are accompanied by drums and percussion and are led by standard-bearers holding a banner. The ensemble, whether in NYC, Detroit, or Europe, is made up of local musicians, in this case, musicians from the greater Detroit area, who receive the music and improvisational structures that Grant creates in advance via MP3s and PDF files. They workshop and rehearse days prior to the event, customizing it and adapting it to the nature of the ensemble and to the requirements of the event and its featured performers.