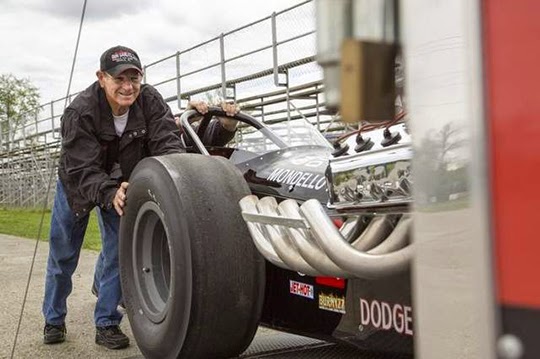 BIG DADDY, Don Garlits, 82, gets some help Friday from grandson Rodney Garlits, 25, both of Ocala, Fla., as he prepares his 426 Hemi dragster for the Detroit Dragway Reunion at Milan Dragway. / Kathleen Galligan/Detroit Free Press

Garlits, 82, drove up from Ocala, Fla., this week for the reunion. Despite his age and the loss of his wife of 61 years, Patricia, to Parkinson’s disease this February, Garlits has not retired. Instead, he is setting his mark with electric dragsters now. He said as recently as April 30, he hit 184 m.p.h. with an electric dragster at a track at Bradenton Motorsports Park in Florida and is shooting to make 200 m.p.h. READ FULL STORY ON THE FREEP