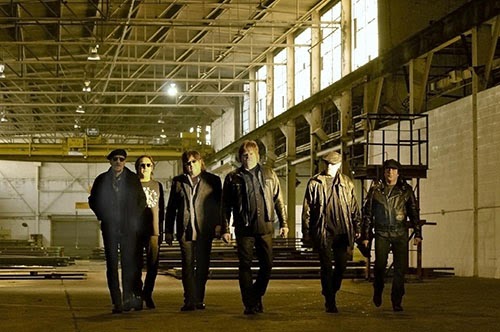 The legions of Detroit rock fans are overjoyed that The Rockets will be playing 4 new tunes, live at the Fillmore on December 28.


Yes.. there have been some changes in the lineup.

So what? This will no doubt prove to be a stellar show with Jim Edwards out front giving it everything he's got and that's plenty.  The new team have played a huge part in the Detroit rock scene forever. (read more below)

The Rocket's playlist contains a ton of tunes written by Johnny Bee Badanjek..his beat continues to astound us no matter what band he is in or what their NAME is...It doesn't matter...the fans will continue to support Detroit's hard working, hard rocking and bad ass musicians...(RK) 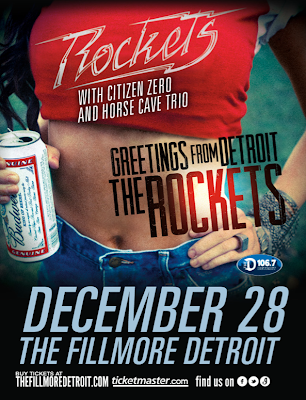 Live Nation presents The Rockets at The Filmore on Saturday Night December 28th. We haven't taken any promo shots yet because we've been so busy in the studio. This is the cover of our new four song EP Greetings From Detroit which will be put up on I-Tunes and Amazon and many other Internet sites with a week or so... stay tuned..


(TICKETS/DIRECTIONS)
The band will be recording more songs and adding onto the tracks we already have. It's some smokin' hot Detroit Shimmy. Live Nation will announce opening bands in the days to come.

Phil “Greasy” Carlisi (guitar) Sirius Trixon & The Motor City Bad Boys, legendary Stooges' members Ron and Scott Asheton (Destroy All Monsters) and toured extensively in the States and abroad with rock-a-billy musician, Robert Gordon, and British guitarist, Chris Spedding. Carlisi has been a mainstay player in the Detroit music scene for over 35 years.

Joey Gaydos (lead guitar), also a Detroit music veteran, has played with rock heavies Rob Tyner (MC5), Cub Koda and the Points (Brownsville Station). Gaydos built a loyal Detroit fan base with his bands, Mugsy, and Weapons and has a reputation for his showmanship and incendiary lead guitar prowess in the Midwest.


KEEP UP WITH THE ROCKETS ON FACEBOOK
at 6:06 PM