THE TORPEDOS: NO REFILL INTERVIEW BY RICKY RAT 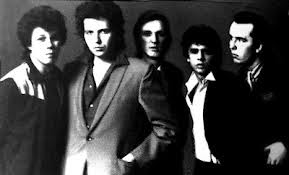 Guitarist Robert Gillespie kicks back and pours another vodka, playing the charming host in his sprawling Pleasant Ridge home. It’s a spacious rock ’n’ roll mansion of sorts — guitars, books and records are scattered amid leopard-print rugs and throw pillows. The basement is jammed with musical gear, ready for impromptu drunken jams.
Gillespie has a casual star quality. He plays in the super-group Power Train as well as with Mitch Ryder (since 1983).
Today, however, he’s talking about his “favorite band.” They were called the Torpedos, they were full-on Motown rock ’n’ roll punks, and they debuted in October 1978 at the infamous Bookies 870 club in Detroit.

“Nobody liked us at first,” says Gillespie as he pops in a 1981 video of a Torpedos performance at Harpo’s. He apologizes in advance, saying the tape had no sound. But once it begins playing, it’s obvious that the sound has been mysteriously restored. Perhaps it’s the work of the spirit of vocalist Johnny Angelos, who is front and center on the video. Angelos, the gangster R&B punk, doesn’t just look out from the screen, he jumps and screams out at you. He sounds cocky and cool and he looks fantastic. He would be dead in three years. 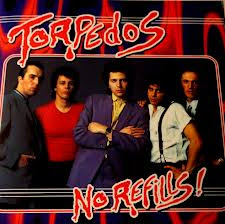 Even though the Torpedos released just one single and an EP, both on Brian Williams’ Four Winds Records, which both sold more than 1,000 copies, they left an indelible mark. Thanks to Mike Leshkevich and his homegrown Motor City Music label, the Torpedos can be experienced fresh and new with the release of the band’s first-ever CD, No Refills. Gillespie and Angelos formed the Torpedos in October 1978, fusing their love of classic Motown soul and blues with elements of Heartbreakers and Sex Pistols punk. Gillespie says the Torpedos stood out from an emerging pack of new bands because “we had killer songs and a excellent front man in Johnny, who was like Rod Stewart, but more deviant.” He recalls meeting Angelos “in 1969 down on Plum Street at the Red Roach coffee house when I was 14 years old.”

Although the two played separately in various bands (Angelos in the Mighty Quick and the Amboy Dukes; Gillespie in the Rob Tyner Band), the Torpedos brought out their shared vision of rock ’n’ roll with an attitude. Their fellow Torpedos were drummer Ralph Serafino, bassist Mike Marshall (both Tyner Band alumni) and keyboardist-sax player Tom Curry. All were in their late 20s and comprised, for all intents and purposes, an “east side band,” though Angelos hailed from Dearborn. (Jim Banner’s replacing Marshall in the summer of ’79 was the only lineup change.) Gillespie loved writing songs with Angelos. “He was really spontaneous; words just flew out of his mouth. He played guitar too; he played some on the EP.” Angelos’ notorious battle with drugs (“He loved pills of all kinds.”) was never much of an impediment to the band, Gillespie says. He contributed everything from songwriting to the design of the band’s collision-style punk collage fliers.