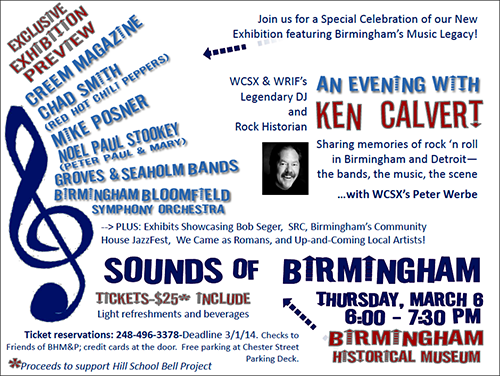 The Birmingham Historical Museum & Park is opening an exhibit called "The Sounds of Birmingham: A Community of Music." The exhibit will focus on local musicians and the role music has played in the community. Stories and artifacts of note include: CREEM magazine (whose offices were in Birmingham from 1972-1984 ) and Chad Smith, drummer for the Red Hot Chili Peppers, who grew up in Birmingham. Major components will include a vignette depicting the CREEM office and Smith’s drums and awards. Other stories include Noel Paul Stookey (Peter, Paul & Mary), Bob Seger,Scot Richard Case/SRC, Mike Posner, and We Came as Romans plus a Townsend Hotel Celebrity List and Autographs. Kids' hands-on activities included free!
at 10:15 AM

this should be a great event! Thinking about coming in from Chicago for this!