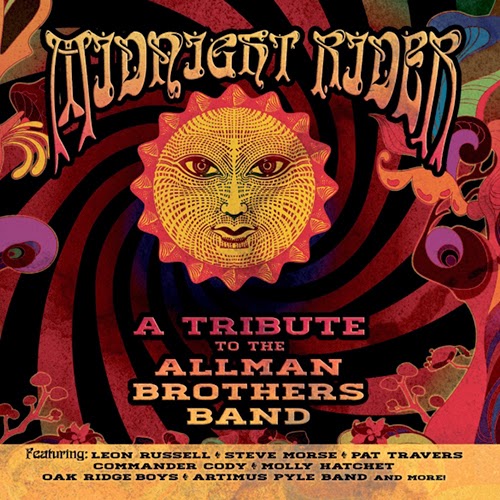 Los Angeles, CA - One of music’s biggest and most influential juggernauts gets the respect and admiration they so richly deserve on this brand new tribute album available May 27th from Cleopatra Records! Featuring an eclectic group of rock, country, and blues legends, Midnight Rider - A Tribute To The Allman Brothers Band offers energetic new covers of the classic hits “Midnight Rider,” “Ramblin’ Man,” and “Whipping Post” as well as one of the most famous instrumental songs in all of rock music “Jessica,” alongside many more Southern fried favorites!

“The Allman Brothers were a central part of my roots,” proclaims guitarist Steve Morse, who shreds his way through a smoldering version of “Whipping Post” on the album. “Living in Georgia much of my life, they were the local legends that everybody loved. They had the swing, the inventive double guitar parts, the ability to jam just long enough to keep the audience, and that golden voice of Greg’s! When my instrumental rock band, the Dixie Dregs, played, we often played ‘Jessica,’ which automatically makes any audience start moving and smiling. I’ve been lucky enough to sit in with many of the members at various times, and we have shared a lot of common ground. I’m still a fan!”

Duane Allen, lead vocalist for country legends The Oak Ridge Boys, declares, “‘Ramblin’ Man’ is the national anthem of Southern Rock & Roll, so it is a huge honor to be asked to be a part of this tribute.” Allen’s sentiments are echoed by several other participants including blues guitarist Eric Gales who considered it a “great honor” and Tinsley Ellis who also speaks enthusiastically of the group as “one of a handful of musical acts, along with Ray Charles and Willie Nelson, that are considered to be a genre unto themselves. It is a great honor to be among the other stellar acts paying tribute to such a legendary and influential American band.”

Speaking for a next generation of blues rock artists, Eli Cook offers both high praise and a word of advice: “The Allman Brothers’ story of talent, hard work, and blind devotion to creating an honest and unique sound is one that every artist should study and imitate. Just as they cut their teeth on Taj Mahal, Cream, Elmore James, and all the great early R&B artists, today’s players are wise to woodshed with the Eat A Peach and Live At The Fillmore albums.” Or just pick up a copy of Midnight Rider - A Tribute To The Allman Brothers Band and let these boys show you how it’s done!


To pre-order the CD at Amazon,