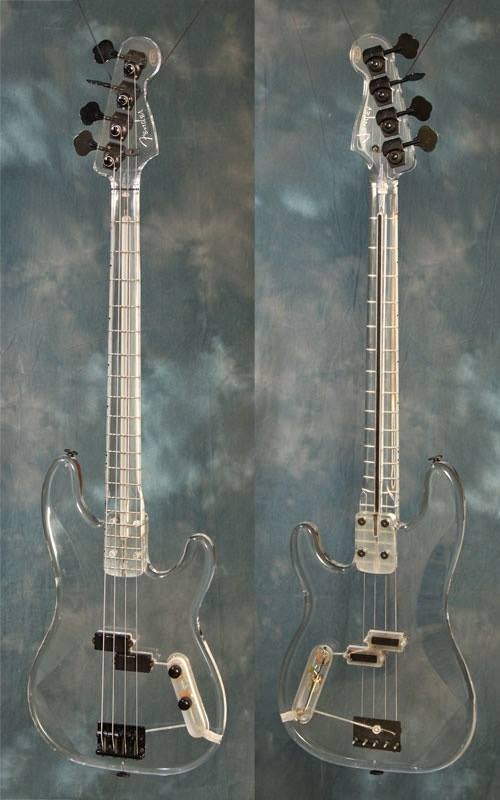 NM, with clear plastic strap, tweed-covered OHC, custom-ordered by Garry Beers of INXS, made in Fender Custom shop by John Page and Michael Stevens, serial number P003 (001 was a Strat, 002 was a prototype body for this instrument), used in "Suicide Blonde" video and promo photos for X album, a one-of-a-kind instrument, with letter from Beers. in Nashville Show 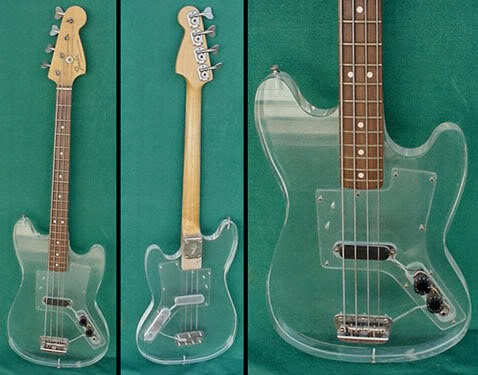 Found this very cool photo of a custom Lucite Fender P bass and shared it on Facebook...a lot of people commented and shared the photo above.....here is some of the buzz....

Stan B. Mikelsavage Sweet but I bet it weighs a ton.

Damian Moss I've never seen one with a plexiglass neck!!!!

Brian Tourville That's Instant Collectible as it's a Fender ..

Michael Segler Damian, me either.. have seen the plexiglas body, but not w/the neck.

Retro Kimmer I had no idea how much these solid plastic guitars weigh....I went to pick up Deniz Tek's Dan Armstrong and almost fell over with the beast.....

Damian Moss They are heavy kim..... also what concerns me is plexiglass is porous. ...over time I'd worry about yellowing....not to mention the fact about resonance. .looks awesome no doubt. ..but I'd have to know more

Benjamin Borden I would be very surprised if it stayed in tune for long ,,the Dan Armstrong Ampegs with the plexi glass body were terrible

Michael Segler I would have to agree w/Damian.. I can't imagine the acrylic is much of a good 'sound body'... that's the reason they only use certain types of wood for the guitar body construction.

Michael Segler yea, like those see through, engine models they used to sell in the back of the comic books;^)

I had a Dan Armstrong lucite bass I bought in 1969. it never yellow through the years and stayed in tune very well,loved it.I was 16 years old When I bought it, and I had a stolen 3 years ago. it's like losing an old friend. Maybe I'll find it someday.

I have a lucite P-bass with a Jazz neck (made by Mojo guitars in '96.) I've toured with it, used it in the studio and it never goes out of tune. Never yellowed a bit after all these years (I'm original owner.) It weighs a LOT tho! I mean, you feel it on stage.

I always felt like the lucite resonated the tone a bit. Almost like a top, bright octave to the bottom sound. Super great looking Bass that made more than a few guys offer to buy it.