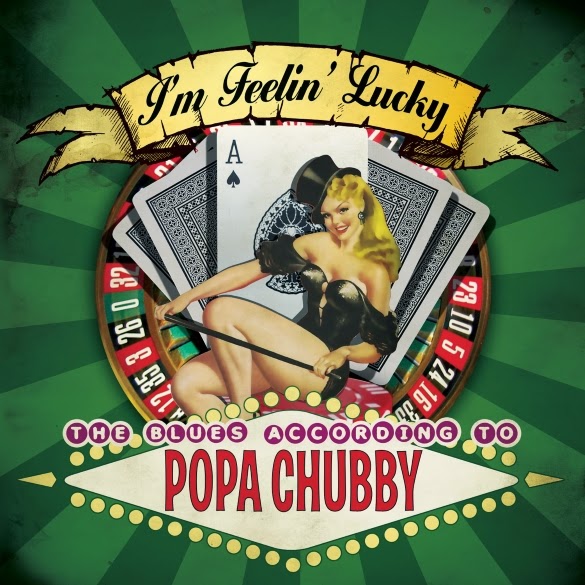 Los Angeles, CA - Larger than life blues figure Popa Chubby has a lot of reasons to feel lucky this year. 2014 marks the 25th anniversary of his emergence as a powerful force in the venerable New York blues scene with his very own band, and his own unique brand of hard hitting, face melting, blues rock n’ funky soul. And he’ll celebrate this major milestone the only way he knows how, with the release of a smokin’ hot studio album I’m Feelin’ Lucky - coming October 14 on Cleopatra Records - and a series of shows on the West Coast!

“It’s been 25 years and I’m still standing,” declares Popa Chubby, and considering the long and rugged road he’s had to travel, that in itself is a miracle. From his beginning in the late ‘70s as a “bad kid with an afro and a brand new Gibson Midnight Special guitar” to his stint as a punk rock sideman for Screaming Mad George and Richard Hell, among others, to signing a deal with Sony and releasing one of the top selling blues albums of 1994 (the phenomenal Booty And The Beast), Popa Chubby has seen it all and lived to tell about it on well over a dozen studio albums!

His newest effort I’m Feelin’ Lucky gave the veteran musician an opportunity to reflect on his extraordinary career and to work on new musical ideas and arrangements in a relaxed, low-pressure setting. Recording at his home studio in the Hudson Valley, Popa called on some of his closest associates to help bring this album to life, including drummer Chris Reddan, keyboardist Dave Keyes, and bassist Francesco Beccaro. In addition, two very special guests brought even more magic to the proceedings, vocalist Dana Fuchs, mostly known for her role in the 2007 Beatles musical Across The Universe, as well as one of the most revered blues players around today, Mike Zito of the Royal Southern Brotherhood.


I’m Feelin’ Lucky is Popa’s debut album for Cleopatra and contains some of his best and most deeply felt writing. “The Way It Is” is an “urban soul ballad,” he explains, “that’s about those times when you just sit there and you realize that you’re all messed up and there ain’t nothing you can do about it...that’s the blues right there.” The title track is a major slice of “badass funk” with heavy wah wah pedal guitar playing from Popa and “great New Orleans style lyrics.” “I’m A Pitbull (Nothin’ But Love)” may be the song closest to his heart: “I’m a big dog lover. I have a little pitbull and I love him dearly. They’re a very misunderstood breed. I work with people at a pitbull rescue who work with these dogs and train them to be service dogs for veterans coming back from Iraq and Afghanistan. It’s a beautiful thing. There is not a more loyal, devoted and emotionally intuitive dog.” It’s these very same qualities in Popa Chubby’s own gracious persona that have been drawing fans to his music for over 2 decades.

Fans will also delight in hearing that Popa Chubby’s Universal Breakdown Tour hits the West Coast later this year with a slew of shows starting in Las Vegas at the Big Blues Bender held in the Riviera Hotel & Casino. For complete tour information, visit www.popachubby.com and get lucky with Popa Chubby!

Check out a video teaser for the album here: