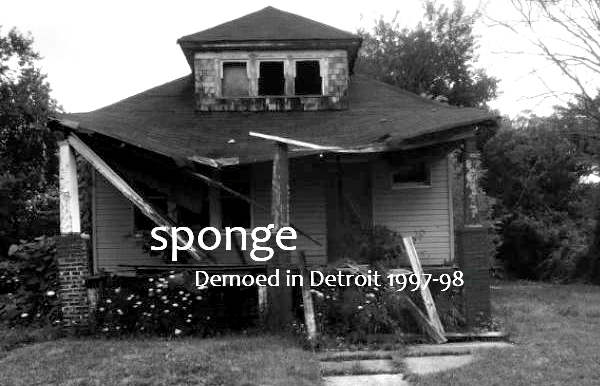 Los Angeles, CA - Fresh from the critical and commercial success of their 1996 sophomore album Wax Ecstatic, Detroit hard rockers Sponge holed up in a small studio in their hometown to record what was to be their third as yet untitled album for Sony Records.

The band, whose songwriting chops had been proved on the megahit singles “Plowed” and “Molly (16 Candles Down The Drain),” looked to founder and lead vocalist Vinnie Dombroski for a new batch of tunes, and Dombroski himself turned to his classic rock heroes like The Doors, The Who and Steppenwolf others for inspiration.

The result was a raw blast of sonically devastating, guitar-oriented rock n’ roll. As the story goes, when legendary A&R rep John Kalodner stopped by the studio to sample what Sponge had been up to, he was not able to tolerate the sheer power of the sessions for long and had to beat a retreat!

For reasons known only to the band, these recordings were shelved and a new set of recordings were produced for Sponge’s 1999 album New Pop Sunday. But now those incredibly inspired studio sessions from 1997-1998 are available for the first time anywhere on the Cleopatra Records release Demoed In Detroit, providing a snapshot of where the band was 20 years ago while also offering a tantalizing taste of what might have been.

In addition to the 13 original songs and 3 blistering cover tunes, this special collection includes 2 exclusive acoustic versions of the band’s hits “Plowed” and “Molly (16 Candles Down The Drain)” recorded especially for this compilation. Raw and powerful, Demoed In Detroit 1997-98 is an essential album for fans of Sponge and classic '90s alternative rock!