Grand Circus is a hard rockin band from the Motor City. No gimmicks. No games. No distracting light shows. Just straight up, in your face rock and roll. The band includes in their influences Black Sabbath, The Cult, Iron Maiden, Metallica, and Motörhead. 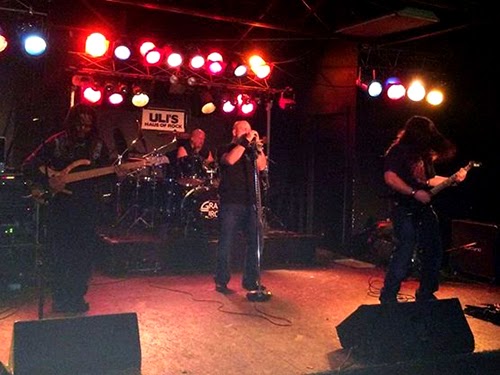 
The latest from the band: "Well we have a new bass player, he is well-known in the Michigan bass world. Grov "Gt" Tigue aka Sir Slap Nasty. He brings a fresh sound to the low end. We just played our first headline show with him last weekend at Uli's Haus of Rock.

We are headlining a big show at Planet Rock on April 5th with three other Michigan based bands. June 26th we are headlining the 89x Homeboy show at the Bullfrog in Redford. We have Bloodline Riot in direct support with Ignoring the Echoes and Broken Day Machine.

We have an East Coast run in July as well as a run to Denver and back as direct support for the Denver based band A Memory Down. We are working with Matt Dalton to get on the Dirtfest and Rockapalooza festivals. I am also working on a Southern run through Texas for the fall.

As far as who have we played with? The list is long. We don't really like to say "we have shared the stage with so & so and so & so because every band can do that. Here are a few of the bands we were direct support for: Days of the New multiple times, Pop Evil, Sponge, Bullet Boys, Alien Ant Farm, Fozzy, Hed Pe, Soil, Prospect Hill, Mushroomhead, Eye Empire, Stardog Champion, Twice Broken, A Memory Down and the list goes on." Cheri Clair
at 12:19 PM No comments: