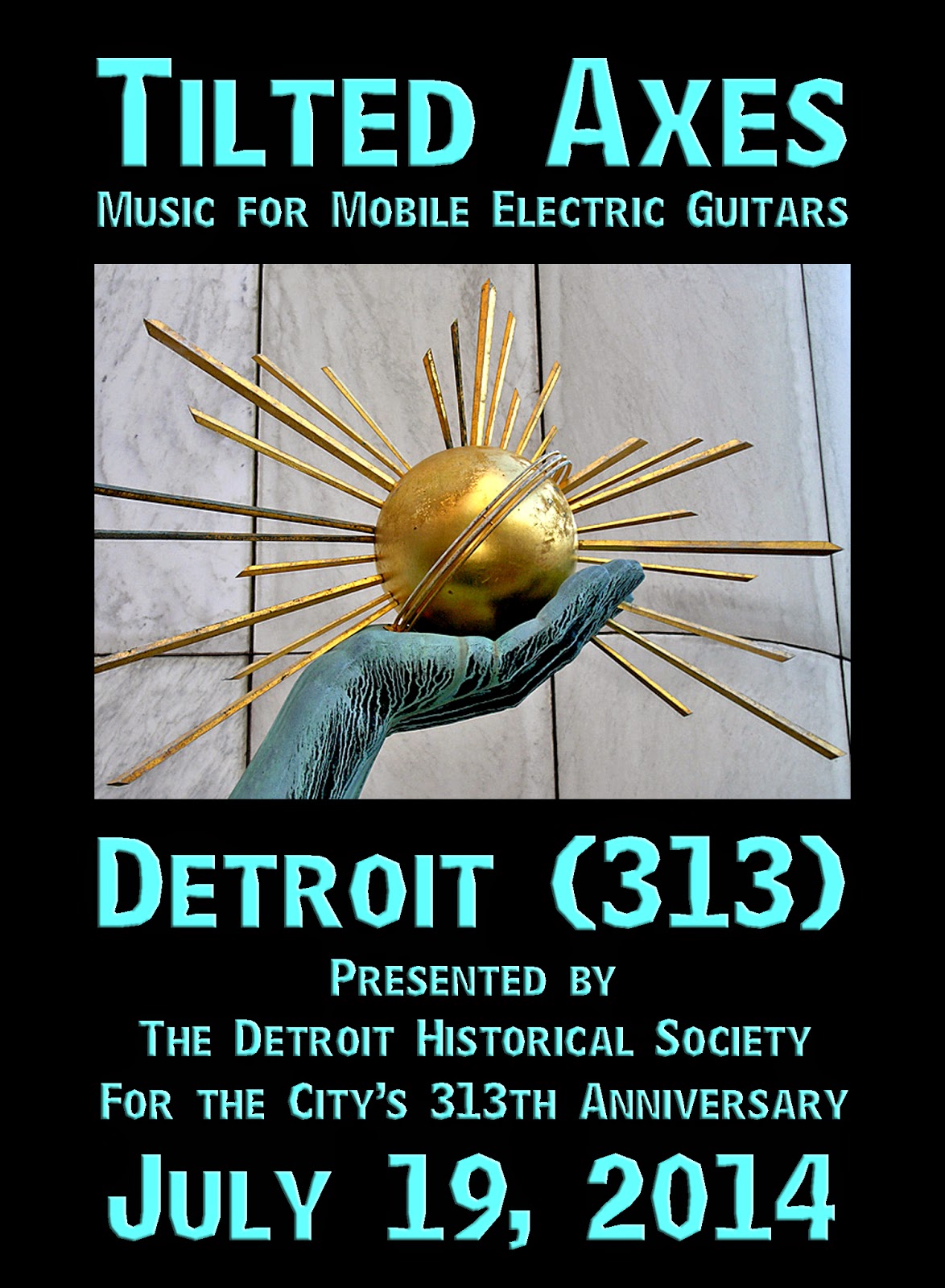 A musical procession through Midtown Detroit, a performance outside & inside of the Detroit Historical Museum, and a Grand Finale at Comerica Park in celebration of The City of Detroit’s 313th Anniversary created and produced by composer Patrick Grant and performed by electric guitarists and featured artists from the Detroit Metro Area.

This presentation kicks off a week's worth of events celebrating the "313th of the 313" at the Detroit Historical Museum. For a complete schedule of these events, click HERE.

In 2011 Patrick Grant, a New York City-based composer/performer and Detroit native, created Tilted Axes: Music for Mobile Guitars for the Make Music New York celebration of the first day of winter. The title of the project refers to the axial tilt of the Earth that brings about seasonal change as well as playing upon the word “axes” which is slang for one’s guitar or other musical instrument. Since then Tilted Axes has had a number of manifestations in NYC, one in Detroit in 2013 for the first day of spring, and now looks forward to European versions beginning in September.

What is Tilted Axes? It is a body of musical works that are performed as a procession by approximately 30 guitarists with portable mini-amps worn by each performer. They are accompanied by drums and percussion and are led by standard-bearers holding a banner. The ensemble, whether in NYC, Detroit, or Europe, is made up of local musicians, in this case, musicians from the greater Detroit area, who receive the music and improvisational structures that Grant creates in advance via MP3s and PDF files. They workshop and rehearse days prior to the event, customizing it and adapting it to the nature of the ensemble and to the requirements of the event and its featured performers.

Tilted Axes has always been event specific, whether it was to celebrate the first days of winter or spring, the mayoral inauguration in NYC, or the opening of the performing season in Europe.

For this year, the Detroit Historical Society has asked Grant to bring the project back to Detroit to celebrate the city’s 313th anniversary on July 19th. Dubbed “Tilted Axes: Detroit (313),” the event is in three parts; the first starts at the Detroit Historical Museum, 5401 Woodward Ave, Detroit, MI at 1:00pm. It consists of a procession through Midtown Detroit with stops at various locations (the DIA, the Science Museum, etc.). A detailed map of the procession route can be seen HERE.

The second part begins when the procession returns to the Detroit Historical Museum.
The players will perform outside in a circle within the museum’s Legends Plaza.

The Third part consists of a procession within the museum and culminates in its auditorium. The events presented at the Detroit Historical Museum will conclude at approximately 5:00pm.

As an added bonus to the day, beginning at 6:00pm, the musicians will be performing another processionat the entrance to Comerica Park before the Detroit Tigers game.

The Music: For this event, Grant will add to the current Tilted repertoire by introducing new variations on the Tilted Axes themes that reflect the musical history of Detroit: