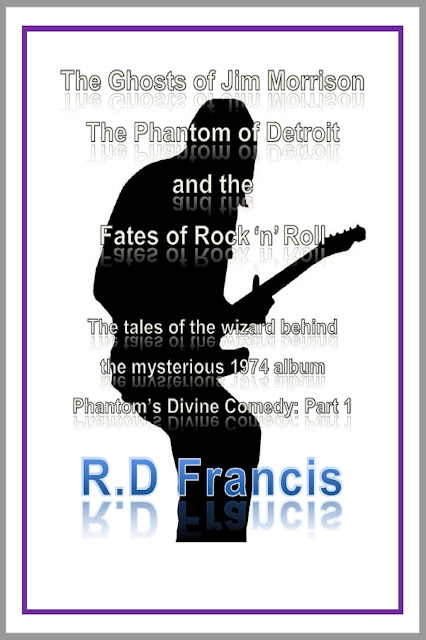 My name is R.D Francis, a U.S based rock journalist. I have self-published my first book, “The Ghosts of Jim Morrison, The Phantom of Detroit, and the Fates of Rock n’ Roll,” the story behind the 1974 Capitol Records’ release, Phantom’s Divine Comedy: Part 1, which many rock fans believed was a Jim Morrison solo album—not realizing “The Phantom” was a Detroit-based musician who worked alongside Bob Seger and Suzi Quatro during his career.


The Ghosts of Jim Morrison, The Phantom of Detroit, and the Fates of Rock 'n' Roll: The tales of the wizard behind the mysterious 1974 album Phantom’s Divine Comedy: Part 1

Some audiophiles questioned the recordings as a lost solo album recorded prior to that iconic musician’s death; others believed the icon still alive, in hiding and recording music; others believed the album an elaborate hoax—a prefabricated band created by musicians and producers looking to profit on the celebrity of a deceased rock star.

To this day, some music journalists dismiss this phantasmal effort as a “comical” concept album: a parody of the then trendy, excessive and bloated rock operas created during the emergence of the progressive-rock epoch of the late Sixties and early Seventies.

This is the ethereal tale of that wizard of Detroit and his epic encounter with the storied Lizard King of Los Angeles. This is a historical journey of the Phantom’s time; a melodious trek through the excitements and the innovations, a musical expedition through the hypes and excesses and the successes and failures of the rock ‘n’ roll music industry and one of its mythical creations: 1974’s Phantom's Divine Comedy: Part 1.

This is the story of the man who replaced Jim Morrison in the Doors.

Hi All, JM is dead. He was to alive to let govorment the law or anyone else put him in hiding. Long live his memory. A.J.