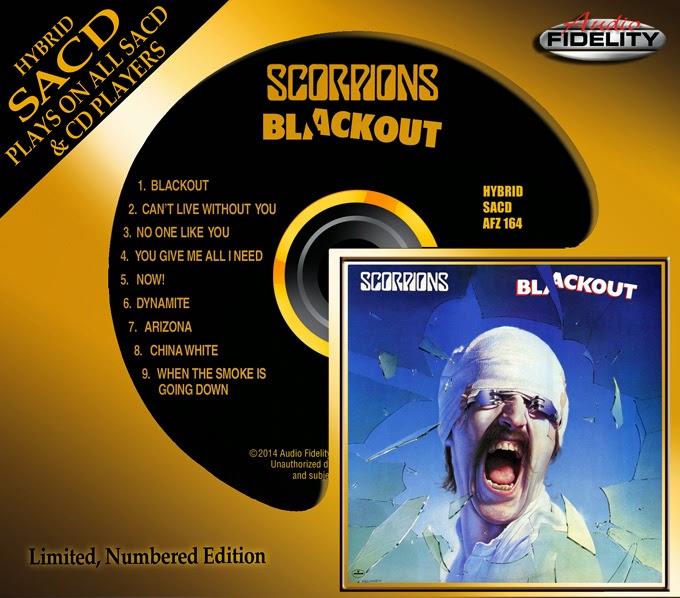 Camarillo, CA - Rock fans worldwide rejoice! Marshall Blonstein's Audio Fidelity is releasing rock legends Scorpions most successful album "Blackout" on limited edition numbered hybrid SACD! "Blackout", their eighth studio album, is Scorpions at their peak...it is the band's 1982 break-through album that made them global superstars. Every song is a gem and this album contains a splendid balance of pop/rock, power ballads and catchy hard rock. Scorpions dish-out fist-poundin' anthems like the top ten hit "No One Like You" then turn around and offer the soul stirring ballad "When the Smoke is Going Down".

Klaus Meine is a singer who knows how to wring the last ounce of impact from each song.The band sounds great as highlighted by the fast-paced performances of guitarists Rudolf Schenker and Matthias Jabs. Herman Rarebell and Francis Buchholz add a tight and powerful drum and bass bottom."Blackout" is the band's most solid and rockin' album. Dieter Dierks production is immaculate. A self-portrait of artist Gottfried Helnwein is featured on the cover of the album.

" 'Blackout' just flat out kicks butt and is one of the most highly anticipated releases in our history." - Marshall Blonstein, Audio Fidelity President