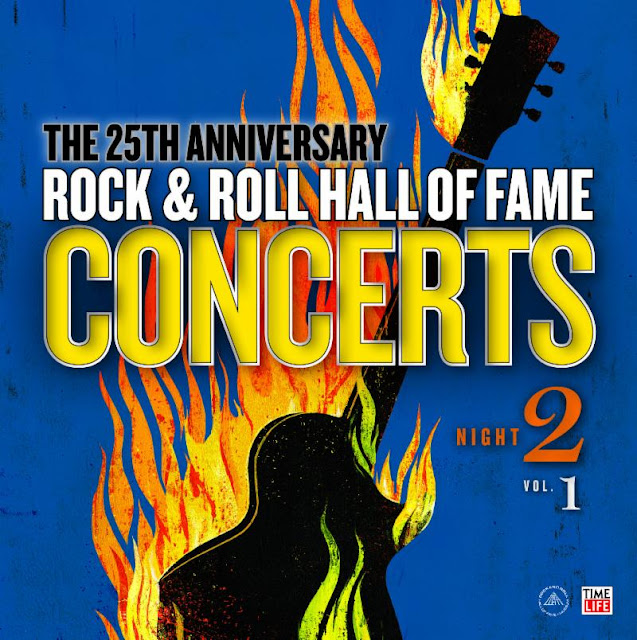 "THE BIG MOTHER OF ALL ROCK CONCERTS[1]",
FEATURING A WHO'S WHO OF ROCK AND ROLL
MAKES ITS VINYL DEBUT ON OCTOBER 19

The legendary, history-making concert -- featuring a who's who of rock from the '50s to the '90s -- including artists performing together in unprecedented combinations that will most likely never be witnessed again can be found on THE 25TH ANNIVERSARY ROCK & ROLL HALL OF FAME CONCERTS: NIGHT 2, VOLUME 1, a brand-new vinyl release exclusively fromTime Life and the Rock and Roll Hall of Fame.

Being released to vinyl for the very first time, THE 25TH ANNIVERSARY ROCK & ROLL HALL OF FAME CONCERTS: NIGHT 2, VOLUME 1 features 10 performances from the second night of the critically-acclaimed and highly-rated HBO special, winner of the Primetime Emmy® Award for Outstanding Sound Mixing. Available for lovers of classic rock everywhere just in time for the holidays, the limited-edition 180 gram pressing will be available on October 19 and priced to add to every music collection for $24.98srp.

Mick Jagger and Fergie in a blistering version of the Stones' classic "Gimme Shelter," with U2 as the backing band
U2 invites Bruce Springsteen to join the band on their song "I Still Haven't Found What I'm Looking For"
Ozzy Osbourne rocks with Metallica on the Black Sabbath classic "Iron Man"
Plus Jerry Lee Lewis, Buddy Guy, Lou Reed, Ray Davies, Patti Smith, Black Eyed Peas and Billy Gibbons and more!

Side Two
"Iron Man" -- Metallica with Ozzy Osbourne (3:06)
"Vertigo" -- U2 (3:57)
"Because the Night" -- U2 with Bruce Springsteen, Patti Smith and Roy Bittan (4:20)
"I Still Haven't Found What I'm Looking For" -- U2 with Bruce Springsteen (5:42)
"Gimme Shelter" -- U2 with Mick Jagger, Fergie and will.i.am (5:00)
About Time Life
Time Life is one of the world's pre-eminent creators and direct marketers of unique music and video/DVD products, specializing in distinctive multi-media collections that evoke memories of yesterday, capture the spirit of today, and can be enjoyed for a lifetime. TIME LIFE and the TIME LIFE logo are registered trademarks of Time Warner Inc. and affiliated companies used under license by Direct Holdings Americas Inc., which is not affiliated with Time Warner Inc. or Time Inc.