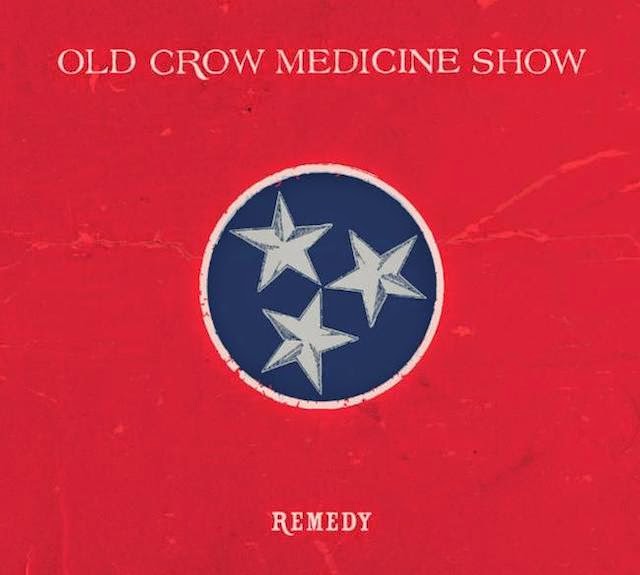 This morning (April 29th, 2014) Old Crow Medicine Show announced the release of their new album, Remedy. It will be out July 1st, 2014 on ATO records.

Old Crow Medicine Show embodies the true style of an American rambling string band. They began by busking on street corners of New York state and through Canada. Their travels led them to Boone, North Carolina where Doc Watson discovered them playing in front of a pharmacy. Mr. Watson invited them to play at MerleFest which immediately launched their professional career and popularity. It wasn’t long after that they relocated to Nashville to take up residency at the Grand Ole Opry, entertaining the audience between shows.

The band has since sold over 800,000 albums, toured the world, been regular guests on A Prarie Home Companion, and played major festivals such as Coachell, Bonnaroo, Cambridge Folk Festival (UK) and the Newport Folk Festival. They have four full length albums: Old Crow Medicine Show and Big Iron World, produced by Dave Rawlings, Tennessee Pusher, produced by Don Was, and Carry Me back, produced by Ted Hutt. Their upcoming album Remedy is also produced by Ted Hutt. Ted is the original guitar player and one of the founding members of Flogging Molly. Ted left Flogging Molly to become a full time producer and has since produced albums by The Gaslight Anthem, Mighty Mighty Bosstones, Bouncing Souls, Chuck Ragan, Jesse Malin, and Lucero among others.

In 2011 Old Crow Medicine Show joined Edward Sharpe and the Magentic Zeros and Mumford and Sons for the inaugural Railroad Revival Tour. The musicians traveled between shows across the American Southwest in a dozen or so vintage train cars from the 1950s and 1960s. Emmett Malloy (The White Stripes under Great White Northern Lights) directed an excellent road movie/concert film documentary of this excursion in, Big Easy Express (2012), which won a Grammy for Best Long Form Music Video in 2013. http://www.bigeasyexpress.com/

In 2013 Old Crow Medicine Show were inducted as members of the historic Grand Ole Opry and had their iconic single “Wagon Wheel” receive the RIAA’s Platinum certification for selling over 1,000,000 copies.

Remedy is now available for pre-order at iTunes, Amazon, and on the band's website.

Old Crow will also be hitting the road this summer in support of the new album including a may 30th date at Meadow Brook Music Festival supporting The Avett Brother. You won’t want to miss those two amazing acts on stage together.

If you can’t make it out to see them live, Old Crow Medicine Show will be performing on the A PRAIRIE HOME COMPANION 40TH ANNIVERSARYCELEBRATION on July 4th & 5th. The band will play several songs. Other performers include: Iris Dement, Stuart Duncan, The Wailin' Jennys, Robin & Linda Williams and many more. Check the Prairie Home Companion website for program air times.

Jason Osburn is a Kimchi and craft beer fueled artist, graphic designer, chef, daddy, and writer. (not necessarily in that order) He’s worked in and around the music industry in Detroit and Nationally for the better part of 20 years.
saddleproductions@gmail.com
http://micraftbeerculture.com/
at 5:51 PM No comments: