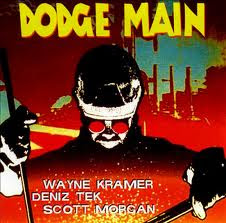 
What an amazing industrial amalgamation of killer musicians! MC5 guitarist Wayne Kramer, the legendary voice and guitar of Scott Morgan, and the ever evolving incredible Motor City-via-Australia Deniz Tek of Radio Birdman make up Dodge Main, with help from bassist Paul Ill and drummer Brock Avery.

I transferred a VCR tape of this show for Dennis Thompson some years ago. The quality isn't perfect but it captures this historical night in Detroit!


The Dodge Main CD is fantastic! What a great record... thankfully Scott Morgan gave me a copy awhile back... You gotta listen to these samples....

Here is a treat... Dodge Main cover of KICK OUT THE JAMS!

So a few days a ago I was talking to Dennis Machinegun Thompson on the phone and he told me how great Dodge Main was. MGT told me what an incredible mix of players that composed Dodge Main. So we wrote to our very busy friend Deniz Tek and asked him to write his take on this moment in Detroit Rock and Roll History.

I got a call from Patrick Boissel, who at the time had recently taken over Greg Shaw's BOMP and Total Energy labels. He suggested assembling a band to be based around me and Wayne Kramer for a studio recording. Wayne's rhythm section, Paul Ill and Brock Avery were included.

Wayne came up with the name "Dodge Main" after the monolithic abandoned Chrysler assembly plant in Hamtramck, Detroit. I flew out to LA, and was put up in a motel in Burbank. During the day, we recorded in a little studio in east Hollywood.

In the morning before heading over to the studio, I wrote songs for the album, reworking lyrics and so forth. We did some older material from the MC5 and (Radio)Birdman, but also wrote some completely new tunes.

It all took about a week. Scott Morgan was in town and joined for some vocals. Wayne produced the sessions, keeping a tight rein on things, and he later mixed the album. Mark Arminski did the brilliant cover artwork. I got paid a small token amount and had all my expenses covered.

Later, Dodge Main assembled in Detroit for a benefit at the State Theatre for local guitarist Phil "Greasy" Carlisi who had to have cardiac surgery. On that occasion, Dennis Machinegun Thompson played drums, and we added some Rationals material to round out the set, including, I think, "Guitar Army" and "Respect".

We also played a show in Cleveland, with Gary Rasmussen on bass and Scotty "Rock Action" Asheton on drums. Wayne and Margaret have a tape of that show which is rumored to be of high quality. They have suggested releasing it at times, but it remains in the vaults at Muscletone Records, Wayne's label. For a while Dodge Main was a revolving door of Detroit/Ann Arbor based musicians. They did some shows without me. The recording was out on both vinyl and CD, and still sounds great. It has stood the test of time. -D

This is great info ! Thank for sharing.