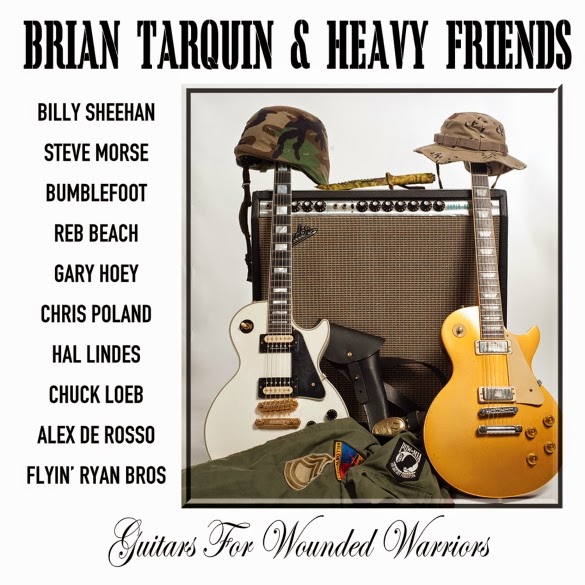 The Multi Emmy Award winning composer/guitarist Brian Tarquin has established himself as a top rate TV composer/recording artist and owner of Jungle Room Studios. In 2002, 2003 and 2005 he won an “Emmy for Outstanding Achievement in Music Direction and Composition for a Drama Series” and has been nominated for an Emmy 6 times. In 2006 SESAC honored him with the Network Television Performance Award. Tarquin first graced the Top 20 Billboard Charts back in 1997 with the commercial release; 'This is Acid Jazz, Vol. 2' on Instinct Records, followed by several solo jazz albums, which charted Top 10 at Contemporary Jazz Radio in the late 90's. From 1996 to 2001, Brian recorded four solo albums, 'Ghost Dance', 'Last Kiss Goodbye', 'Soft Touch' and 'High Life' and has appeared in over 32 releases, selling over 140,000 records in his career.

“What an honor to be part of this album, to play alongside many of the best players out there! Had a blast trading solos with Brian Tarquin!! And best of all, this album supports an important cause, Wounded Warriors. Love to our Warriors, and to everyone for their support.” - Ron 'Bumblefoot' Thal of Guns N Roses

“It is an honor to be a part of this cause. I was just turning drafting age at the end of the Vietnam War, and I still remember that the returning military weren't always treated with the greatest respect. For our modern, volunteer military, we hopefully have learned to show our respect and gratitude. They don't set the policy, but they set the standards.” - Steve Morse

“I had a blast playing bass on Black Hawk! It's a cool riff that pushes the song into a slick overdrive. Nice! Also, and more importantly, the cause it supports is supremely important to me and I'm honored to contribute to our brave soldiers in any way possible. Glad to be involved in this wonderful project!” - Billy Sheehan

“It's challenging, but always fun working with Brian. I feel we both have similar taste in music and in our approach to creating it. We are both searching for that elusive tone or phrase.” - Chris Poland of Megadeth

“When Brian Tarquin sent me the song 'Baghdad' to play on I instantly loved it, very Black Sabbath feel. Brian killed it! 5 Licks To Hell by Brian Tarquin is a very riff driven song ala Dio/Sabbath we do some crazy trade off leads Brian is the real deal!” - Gary Hoey

“I'm honored and proud to be part of this!” - Alex De Rosso of Dokken

“A huge credit to Brian for giving us…and the other artists appearing here…the ability to practice their craft freely. That vibe resonates deeply with the concept behind this release: recognizing those who’ve fought and were wounded defending our freedom. Here’s to all the freedom fighters that enrich our lives…and our art.” - The Flyin' Ryan Brothers