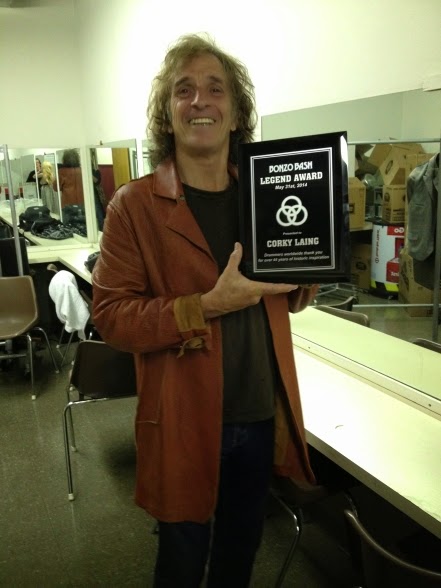 “As the drummer for Mountain, Corky Laing shares the title as one of the best players of his genre. He's also the same good guy he used to be.” – Levon Helm

NYC - Much to the excitement of drummers worldwide, one of rock's icons, drum legend Corky Laing, recently received the prestigious 'Bonzo Bash Legend Award' at the Bergen PAC in New Jersey on May 31st. The award was presented by original Kiss drummer Peter Criss! 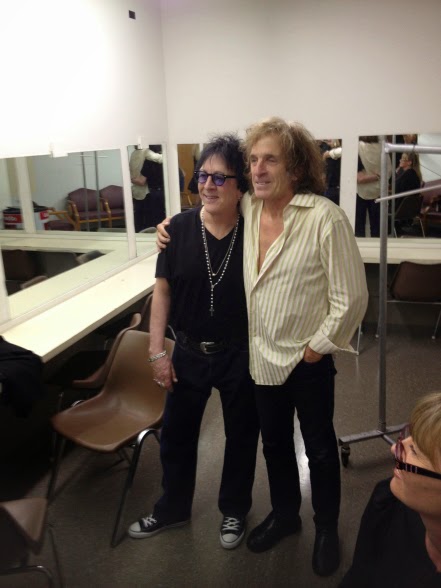 Corky says, “It was a tremendous honor and a total surprise when Peter Criss (from Kiss) presented the 'Legend Award' to me at the John Bonham 'Bonzo Bash'. And to receive the award in front of all these brilliant drummers was a real rush. There seems to be a kind of 'magical crazy glue' that keeps the drumming community tightly wrapped. It's not like the 'Super Bowl of drumming', there is no competition.

Every drummer has his/her own uniqueness. We aspire to reach out while digging deep with a passion to become the very best. I humbly believe in receiving this award I'm being recognized for doing just that. Every day for me is another downbeat, and what a joy it is to live and breath it. It may sound a bit out there, but that's exactly how I feel when I play. I am sincerely in love with my 'all consuming mistress', my beautiful drum kit!”

As well as Mountain, Laing has recorded with a long list of legendary artists including Eric Clapton, Mick Jagger, Bo Diddley and Ozzy Osbourne. He has performed with Meat Loaf, Gov’t Mule, the Allman Brothers, Voivod, Teenage Head and dozens of others. And according to Modern Drummer magazine, Corky Laing “has done as much as anyone in Western culture to turn the cowbell into a rock ’n roll staple”.

This prolific artist is busier than ever. His latest project, 'Playing God', a rock opera created with Matti Häyry and Tuija Takala from Finland, premiered in Basel, Switzerland, and Paris, France in 2013. Recently, in the early spring of 2014, the rock opera was performed in Helsinki, Finland. Laing wrote the music for the album, and is the Musical Director in the stage performances where he also performs a key role, LUKE, who plays drums and sings. The 'Playing God' CD was released on GONZO Multimedia on July 15, 2013. 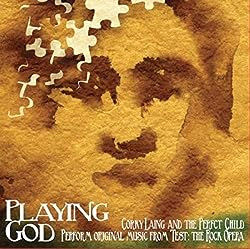 Montreal native Corky Laing, co-founder of iconic supergroups Mountain and West, Bruce & Laing, comes out from behind the drums and spills all about the Golden Age of Rock, which wasn’t always quite so golden… An era when rock stars were bigger than life, in spite of the fact that many of their lives spun out of control.

Laing, who wrote the platinum-selling rock anthem, “Mississippi Queen”, chronicles his life from his innocent early days on the Montreal sock-hop circuit (Bartholomew Plus 3 and Energy) to the pinnacle of rock 'n roll.

On June 27, 2014, Laing, whose skills on the skins are matched only by his wit and candour, will relate how he climbed up and fell down with some of the rock world's most prominent luminaries… but it's not all talk. Corky will show us exactly how and why he is one of the most acclaimed drummers in the music business. And he took it all in from UNDER THE ROCK!