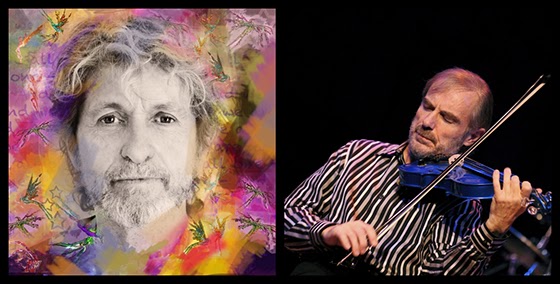 Los Angeles, CA - Music legends Jon Anderson and Jean-Luc Ponty announce the formation of a new ensemble - The Anderson Ponty Band! YES's original singer/songwriter for 35 years, Jon Anderson has had a successful solo career, which includes working with such notable music artists as Vangelis, Kitaro, and Milton Nascimento. International jazz superstar Jean-Luc Ponty is a pioneer and undisputed master of violin in the arena of jazz and rock. He is widely regarded as an innovator who has applied his unique visionary spin that has expanded the vocabulary of modern music. Together these two music icons form a musical synergy that is unparalleled!

“A breakthrough feeling came as I sang with Jean-Luc's music, to be in a band again is very exciting on many levels, we will play and sing our way around the world and have fun, for music is pleasure, music is all that is, music is God” - Jon Anderson

The Anderson Ponty Band also includes Jamie Dunlap on guitars - well known as a film and television composer, most notably 'South Park'; Wally Minko on keyboards - virtuoso player and composer who has performed and recorded with many worldwide stars including Pink, Toni Braxton, Jean-Luc Ponty, Tom Jones and Barry Manilow; Baron Browne on bass who has played with Steve Smith, Billy Cobham and Jean-Luc Ponty; and Rayford Griffin on drums and percussion, who has played with Stanley Clarke Band, George Duke, Jean-Luc Ponty and Michael Jackson. The band will visit the music created by Jon Anderson and Jean-Luc Ponty over the years with new arrangements, virtuosic performances and new energy, while creating new compositions as well.

The Anderson Ponty Band have been writing and arranging old favorites during the past three months. They will be in residence for three weeks in September at Wheeler Opera House in Aspen, Colorado rehearsing, recording and playing a public performance on Saturday September 20th. An album will be finished in Los Angeles and is scheduled for release in early 2015. Also, a videography documenting the making of the album will be released as well as videos and performances. A world tour beginning in March 2015 is in the planning stages.

The Anderson Ponty Band announce the launch of a Kickstarter campaign today July 25th beginning at 2PM Eastern. The campaign will encourage fans and friends to become a stakeholder in the project. Numerous tiers of donations will be rewarded by album downloads, premium CD/DVD packages, VIP ticket access, merchandising, special one of a kind collectibles, special meet and greets with the band and much more.