THE STORY OF GANG WAR BY RON COOKE! 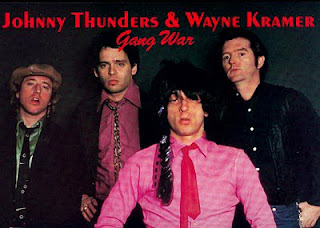 It was sometime after I had left the Sonic Rendezvous band that I got a call from a local music promoter with and interesting idea. As the conversation grew it became clear to me that this would be and opportunity to experience something tantamount to the big bang theory.

Seems Johnny Thunders was going to be in the metro area for a few show's with the Heartbreakers so I agreed to become witness to this musical black hole. As time passed Johnny had taken a liking to the scene here and decided to hang around for awhile. The promoter had convinced JT that maybe he should try changing his habits and he agreed.

The conversion of Johnny Thunders had begun. In a remote house out side of Ann Arbor Michigan. The plan was hatched to clean JT up and build a new band around his style of rock & roll. The first call went out to Wayne Kramer of the MC5 fame, myself, Scott Morgan's brother Johnny Morgan to play drum's what was to become known as the Gang War Band.

We rehearsed in this remote place and I spent a lot of time with JT. I noticed as time went by that he became healthier looking and added some weight on and his eyes were clearer. So were hanging out one day and JT says Ronnie can you take me to town I haven't seen any concrete in weeks. I laughed out loud that this wylie New York cat was freaking out. 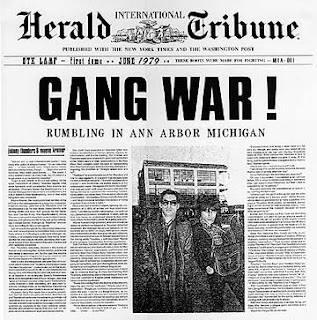 We decided to play a show to see how it would go. I went downtown A2 to a non descriptive bar that was the local watering hole for some of the city's finest drunks you know the kind of place dark smokey and some strange smells. I inquired of the owner who by chance was from my home hood that I hadn't seen in years if we could set up and play the place.

He said we can't pay ya anything. I said fine just get some more table's in here. Come's the day of the show with just a few random call's and word of mouth the bar owner call's and says his phone is ringing off the hook about tonight's gig. This place had never seen live music and it wasn't a place that most would ever enter due to it's extreme funkiness. Well as the pressure was building up and a galactic shift in the universe is about to pop. The line of people is around the corner and down the block. The noise in the place from the chatter of the crowd was deafening. The band comes up from the cellar and begins to peal the wall paper with a sonic blast. Johnny reached up and caught his guitar neck in the ceiling tile pulling it loose.

He decided to swing from the ceiling support's like something out of a Tarzan movie and bam down come's the whole ceiling in the place all forty foot of it on the crowd, the bartender's and the waitresses. The place goes nuts. Ceiling tiles are flying around as if a hurricane was in progress beautiful I thought complete havoc. We didn't hang around long after that.

The owner was pissed off but here's the real deal... that sh*t hole collected it's insurance money swept the place out build a permanent stage and had a 25 year run as the place to play in Ann Arbor. After that I guess you could say we put the STAR in the Star Bar. And it still shines today even though they bulldozed the place and put up a parking lot.

ORIGINALLY POSTED ON RETROKIMMER.COM
at 8:50 AM No comments: